Avalon Clan
Boudicca is a minor character from Disney's Gargoyles. She is a female gargoyle beast with the clan on Avalon.

Like the rest of the Avalon Clan, she led a happy life on Avalon until the attack of the Archmage's forces. During that conflict, she met with Bronx for the first time, and the two got along rather well, and she helped during the battle to defeat Demona and Macbeth when they attacked Oberon's palace.

Later, she attempted to attack Oberon when he threatened the Avalon Clan, but she was chained to the ground and then nearly absorbed into Avalon by the powerful fay's sorcery. She was more tolerant of Oberon later, when he took her to Manhattan to track down Puck. She defended Oberon when he confronted the Xanatos family to take away their newborn son, Alexander, but was defeated by a blow from Xanatos. Presumably, after the rest of this incident, Oberon returned her to Avalon where she resides to this day.

Boudicca steps out from Oberon's Mirror 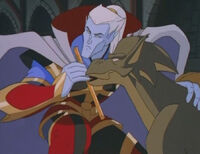 Retrieved from "https://disney.fandom.com/wiki/Boudicca?oldid=3792372"
Community content is available under CC-BY-SA unless otherwise noted.