The Boy from the original story

To protect the Reluctant Dragon

The Reluctant Dragon, Sir Giles, his father, and the townspeople

Tales about knights and dragons, the Dragon, and Sir Giles

Welcomes the Dragon with the townspeople into society.

"It's only a dragon, father."
"T'is evening, From the stars above, A soft mysterious light, Brings thoughts of friendship, joy, and love."
"Now how about that fight?!"
The Boy is one of the protagonists from Disney's 1941 animated short, The Reluctant Dragon.

The Boy is first seen reading his book about knights and dragons next to a tree until he notices his father and his flock of sheep running away scared.

When his father states that he and his sheep saw a monster while describing it to him, the boy deduces from his book that he only saw a dragon. Shocked and terrified by this news, his father runs to the town to warn everybody about the dragon.

Later, the boy decides to have a look at this dragon at the spot where his father saw it. When trying to look for it, he has a slingshot in his hands for defense. Suddenly, he hears someone singing; only to find a big blue dragon bathing happily under a small waterfall. When the boy says Hello to the dragon, the dragon freaks out; thinking the boy came to throw stones or squirt water at him because "he won't have it." When the boy states that he simply came for a friendly chat, the dragon changes his tune; allowing the boy to be seated (the other way of course) as the dragon comes out to dry himself up when using his own tail as a towel. When the boy asks if the dragon has had any nice battles lately, has been scourging countrysides, or devouring fair damsels, the dragon denies all that; revealing that he simply makes up poetry instead (hardly the kind of thing any dragon would do). The dragon happily recites a poem called "Just A-Drifting" while dancing around; much to the opposite of a dragon's description in the boy's book.

The boy warns the dragon's in trouble and that his father is gonna have the whole village aroused with spears and things to exterminate him; considering him an enemy to the human race. The dragon denies and ignores all that and continues reciting poems and dancing; much to the boy's disappointment, which causes him to leave afterward.

In the town, the boy notices people cheering and finds out that a brave knight named Sir Giles a.k.a. the dragon killer has arrived to vanquish the dragon. The boy runs back to warn the dragon only to interrupt the dragon during his music lessons with some birds. The boy tells the dragon that he will have to fight Sir Giles but the dragon refuses to fight; stating he "never does and never did" and "it doesn't agree with him." Then, the dragon tells the boy to run along and "tell Sir Giles to go home" as he continues his lesson with the birds.

Back in town, at an Inn, the boy enters Sir Giles' room as Sir Giles is seen singing while bathing; despite Sir Giles not wanting to be disturbed. The boy comes to talk to Sir Giles about the dragon. At first, Sir Giles guesses it's another tale of woe and misery, the dragon devoured the boy's flocks, made off with the boy's parents (promising "retaliation" while hilariously slipping), or kidnapped some fair damsel with flaxen hair, and ruby lips, and form divine (promising "he shall pay dearly on the field of battle."). The boy simply states that the dragon won't fight. "Preposterous! The fellow must be an infernal cad. Bit of a rotter, what?" says Sir Giles. The boy then describes the dragon as a nice old dragon who likes to write poetry; much to Sir Giles' joy. Sir Giles admits he's a bit of a bard himself and starts reciting a poem called "Ode to a Fleecy Cloud"; much to the opposite of a knight's description in the boy's book. Nevertheless, Sir Giles agrees to go with the boy to talk with the dragon about the fight.

The boy decides to recite a poem (much to both's happiness) and then angrily asks about the fight. Sir Giles finds it splendid but the dragon is shocked since there's nothing to fight and he doesn't believe in it. The boy states in his book that dragons and knights always fight and the dragon can't disappoint the whole village and Sir Giles agrees too. The dragon refuses to discuss it, goes into his cave home, and bids them goodnight.

Sir Giles and the boy try to convince the dragon otherwise with trickery about the events that will happen with the dragon fighting in action and stuff like that. They all decide to fake the fight (since the dragon was about to refuse again when it came to the subject about spears) and there's nothing in the boy's book that says otherwise. And so, it is settled for tomorrow. They all say good-bye but then the dragon tries to change his mind when the boy and Sir Giles have already left.

During the "fight", the boy helps Sir Giles recover his spear as the dragon and Sir Giles continue their "fight" until Sir Giles has "slayed" the dragon. The boy is last seen cheering for the dragon after Sir Giles "reforms the ferocious dragon" and is welcomed into society.

The boy was seen making an appearance while clapping and sitting next to the Reluctant Dragon and Sir Giles in the House of Mouse episode; "House of Crime". Another appearance was when he was seen standing in line with various Disney characters in order to wait his turn to get his seat. 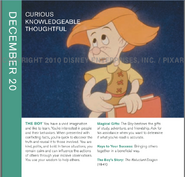 His Disneystrology page
Add a photo to this gallery
Retrieved from "https://disney.fandom.com/wiki/Boy_(The_Reluctant_Dragon)?oldid=3983447"
Community content is available under CC-BY-SA unless otherwise noted.