Loretta's Bracelex features fourteen hexagon buttons that are worn around the wrist. Each button has an icon that represents a different function. Located between where the Braxelex connects from the wrist to the middle finger is the power button. When used, the Bracelex can display up to four or five holoscreens, or more. One used to display a projection keyboard and the other four used to display information and sometimes visual communication. 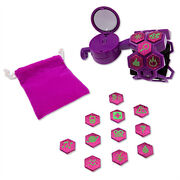 Retrieved from "https://disney.fandom.com/wiki/Bracelex?oldid=2352925"
Community content is available under CC-BY-SA unless otherwise noted.