Bella Luna (2016-present)
Bradley Michael Pierce is a American actor, voice actor, and filmmaker, who is known for his numerous roles and bit parts in television, movies, direct-to-video animation, advertising, and video games. Pierce's Disney roles include Chip Potts in the 1991 Disney animated feature film, Beauty and the Beast, Flounder, the third Crabscout, and additional voices in The Little Mermaid TV series, himself in Mickey: Reelin' Through the Years, Nibs in Return to Never Land, Gas Boy in the English dub of Porco Rosso, High School Student in the English dub of Whisper of the Heart, and additional voices in the English dub of The Cat Returns, Kingdom Hearts II, and Kingdom Hearts II: Final Mix

Pierce began acting at age six, and has since appeared in various projects ranging from commercial and voiceover to television and film. He is best known his role as Peter Shepherd in the 1995 TriStar film, Jumanji and Pete Lender in The Borrowers, and voicing Miles "Tails" Prower in the SatAM version of Sonic the Hedgehog.

His other television roles include Days of Our Lives, Roseanne, Herman's Head, Lois & Clark: The New Adventures of Superman, Touched by an Angel, Profiler, Star Trek: Voyager, and The Busy World of Richard Scarry.

He also appeared with Patty Duke and Melissa Gilbert in the TV film Cries from the Heart as an autistic child named Michael.

Outside of filmmaking, Bradley is the co-founder of Pierce & Luna, a cocktail community geared towards bartending education and liquor reviews.

Chip Potts
(Beauty and the Beast)

A young Bradley Pierce voicing Chip in Beauty and the Beast.

The Beauty and the Beast cast at the 25th Anniversary screening in May 2016. 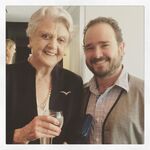 Bradley Pierce and Angela Lansbury in 2016.

Bradley Pierce at the 44th Annie Awards in February 2017.

Bradley Pierce with fans at a screening of the live-action Beauty and the Beast in in March 2017.

Bradley Pierce being interviewed by Lou Mongello for WDW Radio at the 2017 D23 Expo.

Bradley Pierce with artists Jesse Nunn at FabBoy Expo in 2017. 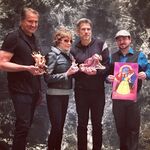 Bradley Pierce at the Street Food Cinema screening of Beauty and the Beast in 2017. 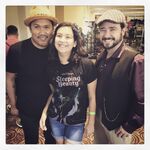 Bradley Pierce and Dante Basco at YesterCon in 2017.

Bradley Pierce and Angela Lansbury at the Geffen Playhouse in 2018.