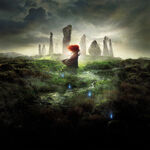 Lord MacGuffin presenting his son to Princess Merida and her family

"With one arm, he was raising the ship and with the other, he raised his mighty sword".

"Archers, to your mark!"

Merida poised to shoot an arrow

Merida arguing with Elinor about her action

Elinor realizing she has been transformed into a bear

Merida gasping at the second sunrise

Merida happy that her mother is back

Show love to each other

"Now that's what I called a wee naked babby."

Elinor as a Bear and Merida in a new tapestry.

Fergus, Merida, Elinor, and Maudie waving goodbye to the Lords

Fergus and his dogs sailing out to retrieve the triplets

Elinor and Merida riding on their horses
Add a photo to this gallery
Retrieved from "https://disney.fandom.com/wiki/Brave/Gallery?oldid=3922039"
Community content is available under CC-BY-SA unless otherwise noted.