Start a Wiki
Brazil (Portuguese: Brasil), officially the Federative Republic of Brazil (Portuguese: República Federativa do Brasil), is the largest country in South America. It is the world's fifth largest country, both by geographical area and by population with over 209 million people. It is the largest Lusophone country in the world, and the only one in the Americas.

Bounded by the Atlantic Ocean on the east, Brazil has a coastline of 7,491 kilometers (4,655 miles). It is bordered on the north by Venezuela, Guyana, Suriname and the French overseas region of French Guiana; on the northwest by Colombia; on the west by Bolivia and Peru; on the southwest by Argentina and Paraguay and on the south by Uruguay. Numerous archipelagos form part of Brazilian territory, such as Fernando de Noronha, Rocas Atoll, Saint Peter and Paul Rocks, and Trindade and Martim Vaz. It borders all other South American countries except Ecuador and Chile.

Actors/Actresses and Crew born in Brazil 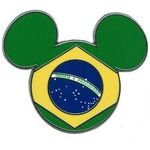 The flag of Brazil
Add a photo to this gallery

Retrieved from "https://disney.fandom.com/wiki/Brazil?oldid=3949138"
Community content is available under CC-BY-SA unless otherwise noted.