For Disney, he portrayed Ray Peyton Jr. in Herbie: Fully Loaded, Pat Tyson in the 1997 Hollywood Pictures film, Prefontaine, Sharon's son in the 1999 Touchstone Pictures film, The Insider, and Charlie McKay in the 2001 Miramax film, Kate & Leopold. He also voiced Josh Mankey in the pilot episode of Kim Possible (A.J. Trauth took over the role of Mankey in all other appearances for unknown reasons) and Lil in Phineas and Ferb. Additionally, he played Trey Kirkman on the ABC political drama series Designated Survivor and Charlie Wiest in The Fix. 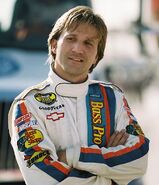 Breckin Meyer speaks onstage during the 16th Annual Golden Trailer Awards in May 2015. 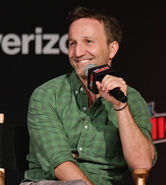 Breckin Meyer attending the 2018 New York Comic Con.
Add a photo to this gallery
Retrieved from "https://disney.fandom.com/wiki/Breckin_Meyer?oldid=4043189"
Community content is available under CC-BY-SA unless otherwise noted.