Brenda Song is an Thai-Hmong American actress, voice actress, singer, film producer, and model. She is best known for her role as London Tipton in the Disney Channel Original Series The Suite Life of Zack & Cody and its spin-off, The Suite Life on Deck, as well as for her portrayal as the title character of Wendy Wu: Homecoming Warrior. She currently voices Anne Boonchuy in Amphibia.

Song guest appeared in Disney Channel shows, like That's So Raven and had a recurring role as Tia in Disney Channel's Phil of the Future. She had minor roles in many American sitcoms, her most notable appearances were in Will and Grace, One Tree Hill, and Strong Medicine.

In 2005, Song was cast for the role of the selfish heiress London Tipton in The Suite Life of Zack & Cody after auditioning for the roles of Maddie Fitzpatrick and London Tipton. As the series became popular, Song became a featured performer on the Disney Channel and performed a voice role in Disney's American Dragon: Jake Long series.

Song starred in the 2000 Disney movie The Ultimate Christmas Present, which won her a Young Artist Award for "Best Performance in a TV Movie Comedy, Supporting Young Actress". She co-starred in other Disney movies, including Get a Clue and Stuck in the Suburbs. Afterwards, Song appeared in Get a Clue, alongside actress Lindsay Lohan.

In 2006, Song starred in the Disney Channel Original Movies Wendy Wu: Homecoming Warrior, which received 5.7 million viewers. This was the first movie where Song does not play a sidekick character according to Variety.

Song has been mentioned in regard to College Road Trip with Raven-Symoné and Martin Lawrence. In 2011, Song reprised her London Tipton role in The Suite Life Movie.

Song was part of the Disney Channel Group of Stars, a group of performers from several different Disney Channel television series, in a version of "A Dream Is a Wish Your Heart Makes". The recording appeared on both the special edition Cinderella DVD and on the DisneyMania 4 CD. The album CD was released in April 2005 under the Walt Disney Records label and peaked at number 15 on the Billboard 200, and number 2 on the Top Kids Audio chart.

Producer Ian Scott has written and produced songs for her. Song appeared in the music video for "A Dream Is a Wish Your Heart Makes" with the Disney Channel Circle of Stars. In 2007, she made a cameo appearance in Ashley Tisdale's music video for her debut single "He Said She Said".

In 2006, Song received an honorary award from the charity organization "A World Of Change" for participating in the "A World Of Change" annual fashion show fundraiser to benefit Optimist Youth Homes & Family Services. Song also participated in The 10th Annual L.A. Cancer Challenge. In addition as part of the Disney Channel Games 2007, Song's team supported the Make-a-Wish Foundation. 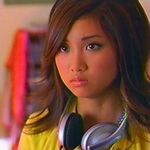 Natasha Kwon-Schwartz
(Stuck in the Suburbs) 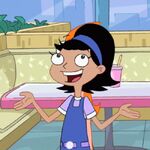 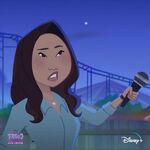 Brenda Song speaks at the Pure Genius panel at the 2016 Summer TCA Tour.

Brenda Song behind the scenes of Amphibia.

Brenda Song speaks at the Dollface panel at the 2019 Summer TCA Tour.