Brent Jay Spiner is an American actor, voice actor, comedian, musician, and singer best known for his portrayal of the android, Lieutenant Commander Data, in the television series Star Trek: The Next Generation and its four subsequent films. He also played Devlin Bowman in the 2002 comedy The Master of Disguise.

For Disney, he played Stromboli in the 2000 TV musical film, Geppetto, Puck in Gargoyles, Gall Trayvis in Star Wars Rebels, Purple Man in The Avengers: Earth's Mightiest Heroes, and Silver Surfer in Hulk and the Agents of S.M.A.S.H..

Silver Surfer
(Hulk and the Agents of S.M.A.S.H.)
Add a photo to this gallery 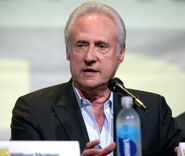 Brent Spiner speaks during the 2016 San Diego Comic Con.
Add a photo to this gallery
Retrieved from "https://disney.fandom.com/wiki/Brent_Spiner?oldid=3926240"
Community content is available under CC-BY-SA unless otherwise noted.