Bret William Iwan is an American voice actor and illustrator. He is the fourth and current official voice of Mickey Mouse, a role that he assumed from the late Wayne Allwine.

He graduated from the Ringling College of Art and Design in Sarasota, Florida. In 2004, he became an illustrator at Hallmark.

He was first called in to voice Mickey and understudy with Wayne Allwine, but unfortunately, Wayne passed away from heart failure and diabetes-related complications on May 18, 2009 and they never had the chance to meet each other. After Allwine's death, the role of Mickey was given to Iwan automatically.

His first voice-over work in a Disney park could be heard in the Animal Kingdom closing show, "Adventurers' Celebration Gathering", as well as on the Tomorrowland Transit Authority PeopleMover attraction at the Magic Kingdom, in which upon passing through Mickey's Star Traders, Mickey responds with his signature laugh and says "That's right, it's outta this world!"

Bret Iwan has stated that in the third season of Mickey Mouse Clubhouse, the voice of Mickey was still indeed Wayne Allwine, due to Mickey's voice sounding a bit lower in the later episodes (Wayne had already recorded Mickey's voice for many of those episodes before his death). Wayne would change his Mickey voice to a mid-low pitch to make Mickey sound more calm as he spoke. Viewers thought that Iwan had already taken over the role when the new episodes came out after Allwine's death. Unlike Allwine, Iwan is keeping Mickey's voice in a higher lighter range similar to what Allwine would normally do when he used to voice Mickey before Mickey Mouse Clubhouse.

Bret's father, Bill Iwan, has an O2½ model railroad that was featured in the April 2011 Model Railroader. 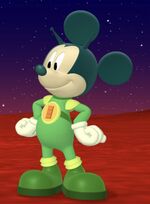 Bret Iwan posing for a photo with Mickey. 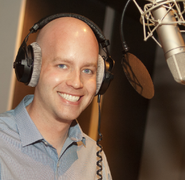