As a music supervisor in 2011's The Muppets, the native New Zealander wrote four original songs for the film, the first being "Life's a Happy Song." He states that his mandate for working on the film was to have zero sexual references, as well as making cuts such as Tex Richman calling Kermit a "mother frogger." He won an Academy Award for Best Original Song for the song "Man or Muppet."

In an interview for the Los Angeles Times, McKenzie revealed he taught Chris Cooper how to rap, got in an argument with Miss Piggy in a recording session over how to sing a song, and that his daughter would ask him in the morning, "Off to work, Daddy? Muppets?," with her considering Kermit a friend of her father's. He considered the whole experience "awesome" and goes on to say, "When I was recording Kermit doing "Rainbow Connection," it was a strange "I've made it" moment working with the A-list.

McKenzie returned as a music supervisor for 2014's Muppets Most Wanted.

On November 12, 2010, Disney issued an early publicity image for The Muppets, showing the team behind the movie. Included was previously unannounced McKenzie with Rowlf the Dog on the piano, already hinting at the fact that he wrote the songs for the Muppet movie. 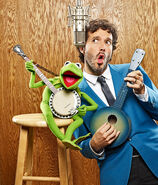 Bret McKenzie with Kermit the Frog
Add a photo to this gallery
Retrieved from "https://disney.fandom.com/wiki/Bret_McKenzie?oldid=4122308"
Community content is available under CC-BY-SA unless otherwise noted.