Kathy (with Bomann)
Rosalind (with Neil)
Brian Blessed, OBE is an English actor, voice actor, author, director, and television presenter who is known for his sonorous voice and "hearty" king-sized portrayals. He is also known for his roles in films, such as Claudius, Blackadder, and Flash Gordon and voiced Grampy Rabbit in Peppa Pig franchise.

For Disney, he provided the voice for the villain Clayton in the 1999 Disney animated feature film Tarzan, Eduardo Enormomonster in Henry Hugglemonster, and Boss Nass in Star Wars Episode I: The Phantom Menace. 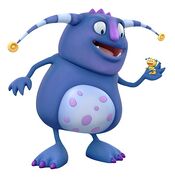