8
Brian Douglas Cummings is an American voice actor and former radio personality. He has provided much voice work for Disney animated productions, and has also been the long-time voice of Buena Vista Home Entertainment (now Walt Disney Studios Home Entertainment's) trailers and promotions, in tandem with Mark Elliott. He was also the Planetary Destinations Announcer in the 1987 Star Tours short and narrated the video documentary shorts: "Under the Sea: The Making of Disney's Masterpiece The Little Mermaid", "Mary Poppins Practically Perfect in Every Way: The Magic Behind the Masterpiece", and "Once Upon a Dream: The Making of Walt Disney's Sleeping Beauty".

Grubby
(Adventures of the Gummi Bears) 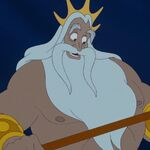 Chef Bouche
(Beauty and the Beast)