5
Brian Manion Dennehy was an American film, stage, and screen actor. He was well known for his roles in several films, such as Sheriff Will Teasle in the 1982 drama First Blood and Big Tom Callahan in the 1995 comedy Tommy Boy. He also had roles in other films, such as Cocoon Presumed Innocent, Romeo + Juliet, and Knight of Cups. For Disney, he played Rosie Little in the 1983 Disney film, Never Cry Wolf, Harrison in the 1988 Disney film, Return to Snowy River, and Father Kelly in the 2002 Miramax film, Stolen Summer. He also voiced Django in the 2007 Disney/Pixar film, Ratatouille. 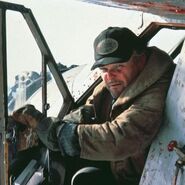 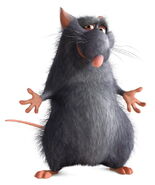 Django
(Ratatouille)
Add a photo to this gallery

Brian Dennehy behind the scenes of Ratatouille.

Brian Dennehy attending the 2019 Tribeca Film Fest.
Add a photo to this gallery
Retrieved from "https://disney.fandom.com/wiki/Brian_Dennehy?oldid=4135521"
Community content is available under CC-BY-SA unless otherwise noted.