Christina Stauffer (2000-present)
Brian Doyle-Murray is an American actor, voice actor, comedian, and screenwriter, best known for his long-running role as the Flying Dutchman in SpongeBob SquarePants and various other characters in other animated shows, such as Family Guy, My Gym Partner's a Monkey, King of the Hill, Adventure Time, and The Goode Family. He is also known for his role as Agnes Delrooney in the adult animated sitcom, Duckman.

For Disney, he voiced Baloo in The Jungle Book: Mowgli's Story, Wittgenstein in The Brave Little Toaster Goes to Mars and The Brave Little Toaster to the Rescue, Ernie in Snow Dogs, The Chief in Teamo Supremo, Chauncey Pesky in The Buzz on Maggie, Glenn in Kick Buttowski: Suburban Daredevil, Skunk in Cabin Boy, Panchax in Buzz Lightyear of Star Command, and Jacob in Motorcity. He also played Skunk in Cabin Boy.

He is also the older brother of actors Bill Murray, John Murray, and Joel Murray.

Chauncey Pesky
(The Buzz on Maggie) 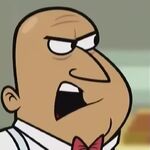