Losing, failing to get what she desires

In "Not Without My Cereal", she takes Kick's cereal and runs around the grocery store, acting as the antagonist, but eventually helps Kick in the end.

Brianna seems to have inherited the shortness genes in the family and looks abnormally stubby for a girl of her age. She has blonde hair, which is somewhat styled to resemble her favorite television character, "Teena Sometimes" (although Brianna's bangs are curled away, with her hair is pulled into a puffed ponytail). She has noticeable blue eyes and a small nose. Brianna is seen with a small crown on her head to resemble the one worn by Teena Sometimes, and she also wears pearl earrings.

Her common attire consists of a pink shirt over a purple jacket, blue jeans, and magenta boots. Due to her idolization of Teena Sometimes, and given her family's hair coloring, blonde may not be her natural hair color.

Brad is her older brother and so is Kick. Little is known of her relationship with Brad, but it is shown that she has a Love-Hate Relationship with her other brother, Kick. She teases Kick about his real birth name, calling him "Clarence" (like Kendall) and often takes what is precious to him, like Trike X-5 and his cereal but she does have a mutual respect for Kick and helps him out occasionally. 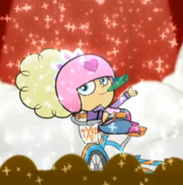 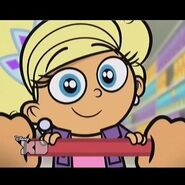