Brick (real name Concretia "Connie" Mason) is a character in Disney/Pixar's 2018 animated film, Incredibles 2, who is part of a group of second-rate Supers who aspire to join the ranks of superheroes.

She is a super tough heroine with mega muscles and a fearless spirit that showcases her strong name. She has enormous super strength and invulnerability - even Mr. Incredible had a difficult time keeping up with her in hand-to-hand combat. However, her verbal skills are severely limited. She also can't swim and has a fear of learning how.

Brick, along with Krushauer, He-Lectrix, Screech, and Reflux, is first seen in a meeting mingling with other superheroes at Winston's office where she introduces herself to Elastigirl after to take part of Winston's growing campaign of making Supers legal again. Later after Elastigirl is captured and brainwashed by Evelyn Deavor, Brick and the other Supers break into the Parr family's new home under Evelyn's control where she catches Frozone while Screech puts Hypno-goggles on him. She and the other Supers are later seen fighting against Dash, Violet, and Jack-Jack on Winston's ship in which they confront them to remove their Hypno-goggles with help from Elastigirl, Mr. Incredible, and Frozone; Brick is suddenly saved when Mr. Incredible punches her, removing the Hypno-goggles from her eyes and saving her from Evelyn's control. Later after Evelyn gets arrested, Brick and the other superheroes are last seen reinstating the Supers Relocation Program where all the superheroes regain their legal statuses. 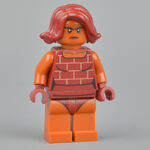