To date Angela
To destroy firearms

His fists and talons

"Wish I had time for a snack."
"Sorry! My fault! I was playing with the gun! Stupid of me! Hope I didn't break anything..."
Broadway is a character from the Disney animated television series Gargoyles. He is one of the rookery trio, the other two being Brooklyn and Lexington, and a member of the Manhattan Clan.

Broadway is an obese, heavyset gargoyle with teal skin and forest green webbing in his wings. He wears a dark blue loincloth held up by a black belt and, unlike the other gargoyles, he has fin-like ears.

Broadway is happy-go-lucky and enjoys eating. He tries to lighten the mood of his clan when they are depressed and finds the bright side of things. He falls in love with Angela over the course of the series. He, along with Brooklyn and Lexington, are reminiscent of The Three Stooges.

One time while visiting Elisa, Broadway found her gun and imitated gunslingers that he had seen in a detective film, but accidentally shot and wounded Elisa in the process. Although she survived, Broadway has since developed a deep dislike of guns and took it upon himself to destroy any firearm he found.

Broadway's enjoyment of eating couples with his love for movies, particularly detective films, which led to him partnering up with Elisa on a few rare occasions. He also learned to enjoy reading after a confrontation with Macbeth and the scrolls of Merlin. Out of all the gargoyles, Broadway (after Goliath) seems to have the closest friendship with Elisa.

At the start of the show Broadway, along with the rest of his clan, lived in Scotland and protected the kingdom of Avalon.

This saved his and the other three gargoyles lives when Vikings came later that day and smashed all the gargoyle statues. When Goliath came back, he informed them what happened and they went after the Vikings.

When they arrive, Magus is enraged that the gargoyles' arrival may have caused the princess' death at the viking's hands, and so he casts a curse on them which can only be broken when the castle rises above the clouds.

A thousand years later, in 1994, opportunistic billionaire David Xanatos claims the long abandoned Castle Wyvern and has it reconstructed at the top of his skyscraper in New York City, along with the sleeping gargoyles.

In the "Future Tense" illusion, Broadway was blind, having lost his eyes in the resistance against Xanatos. He eventually died after an attack by the Thailog Shock Troops.

Broadway with Goliath and Lexington in Toon Disney's Magical World of Toons intro. 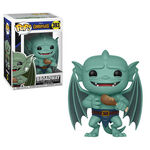 Pop figurine of Broadway
Add a photo to this gallery