Start a Wiki
The Brocamas[1][2] are a minor character from the animated television show American Dragon: Jake Long, in the episode "Fool's Gold". He is voiced by Dee Bradley Baker[3][4].

He is the head leprechaun of Pot O' Gold Import-Export. Jake saved him and his leprechauns from hobgoblins, and in return he gave him one of the gold coin. After putting the coin in the sun, a rainbow appeared on the coin and remember what Brocamas said "Follow the rainbow", and so he did and to the place he owns, Pot O' Gold Import-Export. After saving the business from an angry giant, and because he followed the rainbow, he became an employee for Brocamas as the leprechauns' bodyguard. But he went angry after finding out Brocamas was helping the Huntsman with the Aztec skulls. 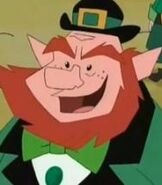 Retrieved from "https://disney.fandom.com/wiki/Brocamas?oldid=2934700"
Community content is available under CC-BY-SA unless otherwise noted.