Monsters University
Brock Pearson is a character in Disney•Pixar's 2013 animated film, Monsters University. A massive birdlike purple monster with antelope-like horns, he is the vice-president of the Greek Council.

"This preppy-looking fraternity monster has been chosen to assist the Greek Council president in emceeing the school’s annual Scare Games. Jock-like and what some might refer to as a 'meathead,' Brock is a loud, enthusiastic emcee who relishes the danger of the Scare Games' challenges."[1]

When it comes to sports and the Scare Games, Brock is and full of passion. He is easily excited and is very energetic, and often needs to be calmed down by his Greek Council partner Claire Wheeler.

Brock and Claire with Mike 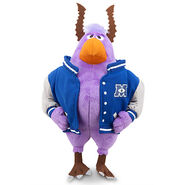