His machete, bare hands, and fists

"Odds bodkins! Gadzooks! Look at that old spook of spooks!"
Brom Bones is the secondary antagonist in Disney's 1949 short The Legend of Sleepy Hollow (the second half of The Adventures of Ichabod and Mr. Toad). He is the leader of the Sleepy Hollow Boys, a gang of young men in Sleepy Hollow.

Washington Irving was very descriptive of Brom Bones' personality. Disney's version lifted that description nearly word for word. He is "quite the hero of all the country bumpkin..." and he's "always good for a fight or a frolic. Still there is no malice in his mischief..."

Brom is slender and muscular and he has black hair. He wears a green vest over a light green shirt, and black pants.

In the movie, Brom Bones is the town hero of Sleepy Hollow. He likes kidding around and drinking beer with his buddies, the Sleepy Hollow Boys. Brom likes to play jokes, particularly on the new school master, Ichabod Crane, but Ichabod is very good at ignoring these taunts. Brom Bones has always had his eyes on Katrina Van Tassel, the beautiful daughter of Baltus Van Tassell, the county's most prosperous farmer. His physique and bullying behavior always scares away rivals for Katrina's hand, but he finally finds a match in Ichabod, with his wit, speed, and kind behavior. Katrina plays the two off each other, and resulting in Brom becoming more jealous of Ichabod as he wins Katrina's favor. As they both try to escort her home from a day of shopping, Brom not only gets stuck with all the packages, he loses them as he tries to catch up with both Ichabod and Katrina and trips over the gate, gets locked out of the house, mistakes the sounds of Ichabod kissing a flower Katrina gives him for the two of them kissing, passes up the chance of finally knocking out Ichabod to look nice in front of Katrina, falls down a well as he sprints after him and is knocked senseless by a carelessly tossed horseshoe as he climbs back up.

At the Van Tassel's annual Halloween party, Brom silently fumes as he watches Ichabod and Katrina happily dance together. He notices Tilda, a short plump woman sitting across from him who tries to flirt with him, but Brom is abhorred by her. Brom then gets the idea to switch Katrina with Tilda while on the dance floor. This backfires comically, as Tilda absolutely refuses to let him go. Brom succeeds in switching partners at least once, but Ichabod promptly cuts in, leaving Brom once again with his unwanted lady friend. He tries to follow Ichabod but Tilda keeps pulling him back until he manages to throw her in a closet and trap her inside. Brom spies Ichabod dancing on the cellar door, inspiring him to open it and get him to fall in. Unfortunately, Tilda emerges from the front door with a big "Yoo hoo!" and makes a beeline straight for Brom. Brom backs into the cellar and the door shuts on him. He gets out through the doors leading outside and is forced to watch Ichabod finish his impressive dancing, making him the hit of the party. Defeated again, the disappointed Brom is forced to admit that Ichabod has won again and his dancing is exquisite.

Then, as Brom is eating a sandwich, he spots Ichabod knock over a salt shaker and nervously toss the salt over his left shoulder. The devious bully had discovered the schoolmaster's weakness: his strong belief in superstitions. Brom, taking advantage of this, promptly steps forward and begins to tell the story of Sleepy Hollow's most infamous specter, the Headless Horseman. As he gets into the spirit, his song becomes darker and darker, with him acting out the part to Katrina's amusement and Ichabod's growing terror. Brom concludes by telling how he met the Horseman himself last Halloween but escaped him by crossing the old bridge at the edge of the woods ("Once you cross that bridge, my friends, the ghost is through, his power ends!").

That night Ichabod has a terrifying encounter with the Headless Horseman much like Brom's tale. As he manages to cross the bridge, the Horseman throws his head -- a blazing jack'o'lantern -- at Ichabod. The next morning Ichabod mysteriously disappears, and the only things that are found by the bridge are Ichabod's hat and a shattered pumpkin. Brom winds up marrying Katrina while rumors begin to spread that Ichabod is still alive and married to a wealthy widow in a distant county. No one in Sleepy Hollow believes these rumors of course, because they believe that icabod had been spirited away the headless horseman. 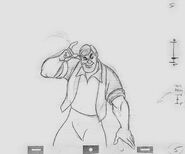 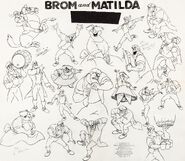 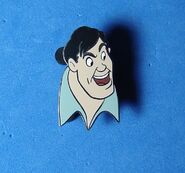 Retrieved from "https://disney.fandom.com/wiki/Brom_Bones?oldid=3744282"
Community content is available under CC-BY-SA unless otherwise noted.