Being with Hudson, Boudicca, sausages

Bronx is a character from the Disney animated television series, Gargoyles. He is a member of the Manhattan Clan and a survivor of the Wyvern Clan. Unlike the rest of the clan, Bronx is a gargoyle beast with a doglike brain, as well as having the inability to speak. Additionally, his lack of wings often results in him having to be carried by another gargoyle or excluded from the nightly activities, though he possesses excellent speed and agility.

Although a member of the Manhattan Clan, Bronx is not technically a gargoyle. Rather, he is a gargoyle beast resembling a dog, or at least with a doglike brain. So much so that when Puck transformed the Manhattan Clan, he turned into a dog while the other gargoyles turned into humans. Bronx has a deep blue color, fan-shaped ears, two small horns above his brows, and three spikes running along his back. His tail is very short. As mentioned above, Bronx lacks wings and has to be carried (usually by Hudson) while air traveling.

Unlike the other gargoyles, Bronx cannot talk, but he is still very intelligent and considered a full-fledged member of the clan. Bronx is a fierce and formidable fighter when there is an emergency, a loyal friend, and a very good judge of character. He is often found sleeping by Hudson's recliner, while Hudson is watching TV. Bronx hates pigeons, with almost savage fury, frequently chasing them away when he wakes at dusk.

At the start of the show Bronx, along with the rest of his clan, lived in Scotland and protected the kingdom of Avalon.

One night after saving the kingdom. He and three youthful gargoyles were unfairly harassed by a paranoid mother in the courtyard, and despite their efforts to appease, they are forced to frighten their harassers to defend themselves. Their leader Goliath subsequently reprimands them for threatening the humans and orders them to remain in their nesting caverns where the clan's eggs are resting.

This saved him and the other three gargoyles' lives when Vikings came later that day and smashed all the gargoyle statues. When Goliath came back, he informed them what happened and they went after the Vikings.

When they arrive, Magus is enraged that the gargoyles' arrival may have caused Katherine's death at Hakon's hands, and so he casts a curse on them which can only be broken when the castle rises above the clouds.

When the Gargoyles are naming themselves, the one known as Brooklyn names him Bronx.

Bronx in the form of a dog 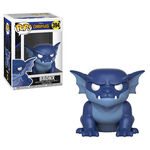 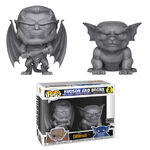 Pop figurines of Bronx and Hudson 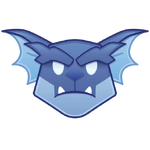