Goliath's harshness, being treated like a hatchling, being manipulated

Brooklyn is a character from the Disney animated television series Gargoyles. He is one of the Trio, the other two being his rookery brothers Broadway and Lexington, and is a member of the Manhattan Clan. He would later become Goliath's second-in-command.

Brooklyn is a young gargoyle with red skin, black eyes, and a wild mane of long, white hair. He also has two horns sticking out of his forehead, and his face resembles that of a pterosaur. He wears a dark blue loincloth held up by a black belt.

Brooklyn is the young, rebellious teenager of the clan. He likes exploring and finding out more about the human ways. He once wore sunglasses because they looked "awesome and cool." He is also very quick-witted and has a certain fondness for making wisecracks at times. He, along with Broadway and Lexington, is reminiscent of The Three Stooges.

Brooklyn is somewhat of a tough guy and quickly grew to love the 20th century. He also found a desire for making friends outside the clan, which led to his attempt to befriending a biker gang, only to be attacked by them and saved by Demona. However, after Demona tricked him, Brooklyn developed a hateful vendetta against her for her deception.

Despite his antics, Brooklyn is a capable leader when he needs to be with a formidable talent for tactics, which is what earned him the rank of second-in-command. The position, however, has given Brooklyn a better appreciation for the burden of leadership and is reluctant to take on the responsibility, that he asked Goliath to take care of himself, that he was in no hurry to take up the mantle of his leader and father-figure. Even so, Brooklyn knows when to sets his doubts aside and to act when there's no room for hesitation and recognize when he is needed.

Initially, Brooklyn, along with the rest of his clan, lived in Scotland and protected the kingdom of Avalon.

This saved him and the other three gargoyles' lives when the Vikings came later that day and smashed all the gargoyle statues. When Goliath came back, he informed them what happened and they went after the Vikings.

When he first met Angela, he competed against Broadway and Lexington for her affection, Angela chose Broadway.

During the events of the SLG comic series in a storyline based on an unproduced spinoff series titled TimeDancer, Brooklyn comes into contact with the lost Phoenix Gate, which shatters and releases a powerful Phoenix that begins transporting him to different points in history in an experience that lasts 40 years for him, only to return to the present 40 seconds after his original departure. During these off-panel adventures, he fell in love with a feudal Japanese gargoyle named Katana that accompanied him back to 1997 Manhattan with her pet gargoyle beast Fu-Dog, their son Nashville, and an unhatched egg nicknamed Egwardo.

Brooklyn led the resistance against Xanatos and was mated with Demona. He was killed by the Xanatos Program inside the Eyrie Pyramid. ("Future Tense"). However, this was a dream created by Puck to trick Goliath. Into giving him the Phoenix Gate. 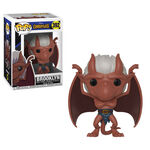