Timon trying to catch him

“Hi there, fuzzy face! You call that huntin'-slash-stalkin'-slash-predatory behavior? Why, I've seen rabid wombats what get more stealthy than you.”
―Bruce as he meets Timon

Bruce is a character from the Timon & Pumbaa TV series who appears in the episode "Back Out in the Outback".

Bruce lived in the Australian Outback, where he became an expert at bug-catching.

“Y'know something, fuzzy face? I think I'm beginning to like ya!”
―Bruce to Timon

Bruce is quite clever, as he managed to outsmart Timon on every one of his attempts to capture him. He can be aggressive and abusive to anyone who attempts to capture him, which is evident in how violently he treated Timon. Timon tried to catch Bruce so many times that the land crab began to enjoy the battle. He also nicknamed Timon "fuzzy face."

Bruce is also shown to be jovial, feisty, and wise-cracking. At some point, the crab met Pumbaa and helped him catch bugs, which caused him to develop a friendship with the warthog. According to Pumbaa, Bruce is an expert at bug-hunting.

Bruce is a massive land crab, being even taller than the meerkat Timon. He has a hard blue shell, long spindly legs, and a bushy red mustache. His eyes are black.

When Timon and Pumbaa visited the Australian Outback, Timon suggested that they split up to catch their own bugs in order to measure their true potential, much to Pumbaa's disappointment.

While Timon was hunting bugs, he encountered Bruce, whom he mistook for a giant bug. Bruce tried to convince Timon that he was actually a land crab, but the meerkat did not believe him and attempted a fight to the death with him. Bruce chased Timon away by blowing him into a giant pretzel and letting him loose to the air. Unwilling to give up, Timon chased after the crab and attempted to beat him with a spiked bat. Bruce once again dispatched of Timon by using the meerkat's own weapon against him. He then proceeded to beat Timon with every kind of tool the meerkat produced until Pumbaa managed to distract Timon long enough for the meerkat to hide in his friend's mane.

After rejecting Pumbaa's offer to help him catch the "bug," Timon launched more assassination attempts on Bruce, all of which ended in failure. After the final attempt, in which Bruce managed to outsmart Timon by using the meerkat's own elaborate trap, Timon gave up and collapsed on the sand. Pumbaa bounced up to his friend in good spirits and begged him to come meet his new friend, who had been helping him catch multitudes of bugs in the Outback. Timon followed the warthog until he figured out that Pumbaa had been getting help from Bruce. Scared for his life, Timon fled, while Pumbaa and Bruce shared a laugh. 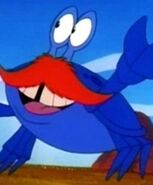