Sam and Lee (both with Holcomb)
Michael (with Gilbert)
Bruce William Boxleitner is an American actor, who is best known for portraying the lead characters Tron and Alan Bradley in the Disney's 1982 science-fiction film, Tron, its 2010 sequel Tron: Legacy, and the Flynn Lives marketing campaign. He has also reprised the role of Tron by lending his voice talents to the video games Tron 2.0, Kingdom Hearts II, and Tron: Evolution, and the Disney XD animated series, Tron: Uprising. Boxleitner was set to reprise his role as Alan Bradley in the scrapped Tron sequel, Tron: Ascension.

Bruce Boxleitner at the premiere of Tron: Legacy in December 2010. 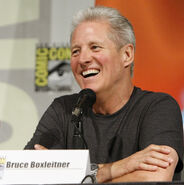