David Alan Barclay
Bruce Lanoil is an American actor and puppeteer, who works for the Jim Henson Company.

For Disney, he is a "voice double" for Timon from The Lion King franchise. He also voiced the character in the video games Kingdom Hearts II and Disney Th!nk Fast, and the Timon and Pumbaa's Wild About Safety short films, and also known for puppetering various characters in Dinosaurs and was also the face performer of Henry Dixon Taylor in the 2002 film, The Country Bears. 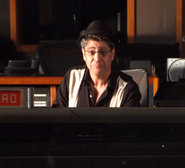 Bruce Lanoil's cameo in Disney Drive-On with The Muppets

Add a photo to this gallery
Retrieved from "https://disney.fandom.com/wiki/Bruce_Lanoil?oldid=4201435"
Community content is available under CC-BY-SA unless otherwise noted.