1987-present
Bruce William Smith is an american character animator, film director, television producer, and storyboard artist. He is best known as the creator of Disney's The Proud Family.

Smith studied animation in the character animation program at the California Institute of the Arts.

One of the few black animators working in the industry, Smith got his start as an assistant animator for Bill Meléndez's 1984 Garfield television special Garfield in the Rough. He went on to animate for Baer Animation on Who Framed Roger Rabbit, and in 1992, directed his first feature, Bébé's Kids. Other notable work for Smith during the mid-1990s included supervising the animation for The Pagemaster, serving as director and character designer for Happily Ever After: Fairy Tales for Every Child, designing the characters for A Goofy Movie and C Bear and Jamal, and co-directing the animated segments of Space Jam. He was also was the creator of Da Boom Crew along with John P. White and Stiles White.

In 1998, Smith joined Walt Disney Feature Animation. He served as a supervising animator on four of its films: Tarzan, The Emperor's New Groove, Home on the Range, and The Princess and the Frog. In 2000, when he still worked for Hyperion Pictures, he piloted his series The Proud Family to Nickelodeon, who passed on it. Disney Channel eventually picked the series up the following year and ran it until 2005. The series was the first to be produced by his production company, Jambalaya Studios. 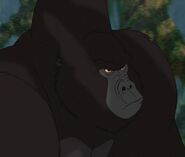 Piglet
Add a photo to this gallery
Retrieved from "https://disney.fandom.com/wiki/Bruce_W._Smith?oldid=4431186"
Community content is available under CC-BY-SA unless otherwise noted.