With Moore:
Rumer Glenn Willis
Scout LaRue Willis
Tallulah Belle Willis
With Heming:
Mabel Ray Willis
Evelyn Penn Willis
Walter Bruce Willis is a German-born American actor and film producer, who is best known for his television role as David Addison on the ABC comedy-drama series Moonlighting from 1985 to 1989, and as John McClane in the Die Hard franchise (which is now owned by Disney following the merger of Disney and 20th Century Studios), which were mostly critical and uniformly financial successes. He has also appeared in over sixty films, which are mostly box office successes, and is well-known for voicing Spike the dog in Nickelodeon's 2003 animated crossover film, Rugrats Go Wild and RJ the raccoon in DreamWorks' 2006 animated feature film, Over the Hedge.

For Disney, he portrayed Russ Duritz in the 2000 comedy film, The Kid. He also played Dr. Malcolm Crowe in the 1999 Hollywood Pictures film, The Sixth Sense, Dwayne Hoover in Breakfast of Champions, Dr. Bill Capa in Color of Night, and David Dunn in Unbreakable. He even reprised his cameo role in Split under Universal Pictures, as well as reprising his big role in Glass. Additionally, he portrayed Tom Greer in Surrogates and Harry S. Stamper in Armageddon. 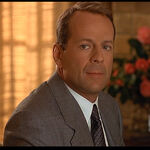 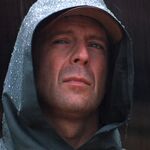 Tom Greer
(Surrogates)
Add a photo to this gallery

Bruce Willis at his Hollywood Walk of Fame ceremony in October 2006.

Bruce Willis and his wife, Emma Heming attending Disney on Ice in November 2014.

Bruce Willis speaks at the 2018 San Diego Comic Con.
Add a photo to this gallery

Retrieved from "https://disney.fandom.com/wiki/Bruce_Willis?oldid=4485474"
Community content is available under CC-BY-SA unless otherwise noted.