At Home With Olaf

Olaf's off-key vocalizing, Elsa dying, the Northuldra and Arendellians being at war

Bruni is a character in Disney's 2019 animated feature film, Frozen II. A salamander of innocuous appearance, Bruni is an inhabitant of the Enchanted Forest and the elemental spirit of fire. Though shy at first, Bruni quickly bonds to those with the patience to understand him, as Elsa does.

Bruni is one of four elemental spirits in the Enchanted Forest, the others being the Water Spirit the Nokk, the Earth Giants, and the Wind Spirit Gale.[1] To the Northuldra, he is known as simply the Fire Spirit. When set loose, he sets the entire forest ablaze, creating beautiful but violent fires all throughout his path. But when in a passive state, he can create small flickers of flame to help the Northuldra tribe.

Thirty-four years before the events of the film, the then-monarch of Arendelle, King Runeard, murdered the leader of the Northuldra in a false gesture of peace. Bruni, along with the other spirits, was so consumed with rage by the treacherous act that they turned against all the humans. A curse was placed over the Enchanted Forest and trapped everyone involved in the fight within the mist, and the elementals entered dormancy. The only way to undo the curse was to destroy Runeard's dam—the object that sparked the conflict—that would sate the elementals.

Bruni is the second elemental spirit encountered by Elsa, Anna, Kristoff, Sven, and Olaf. After meeting Gale, the Northuldra tribe, Lieutenant Mattias, and the other Arendellian soldiers trapped in the Enchanted Forest, Bruni appears as a flame that descends and spreads on to the trees and grounds of the forest. Using her ice magic, Elsa puts out the flames Bruni generates and chases him into a small hole. A cornered Bruni simmers down and tries to hiss at Elsa. Elsa gestures to the salamander that she means no harm, extending her hand to as a sign of goodwill. Though cautious, Bruni reluctantly crawls up Elsa's hand, accidentally burning Elsa's hand due to his heat, but she manages to calm him down, and when he calms down, so do the forest fires. Elsa then offers Bruni some snowflakes that he happily gulps down, establishing a newfound bond with Elsa. Once calm, Elsa realizes that Bruni can also hear the mysterious voice that had been calling her. When she lets him go, he tilts his head in a certain direction, telling her that she must keep going north to find the voice.

When the Earth Giants, having sensed Elsa, descend upon the Northuldra encampment, where the entire party has gathered for the night, Olaf hides behind a rock and meets Bruni. Bruni sets his body aflame, causing Olaf to panic and think that the Giants will find them, so he tries to blow out the flames, which doesn't work. Olaf takes Bruni in his hands, but then quickly sets him back down upon getting burned. As he attempts to put out the flames using her permafrost body, Bruni jumps on Olaf's head, extinguishing his flames. Olaf briefly scolds him, saying that this is the reason why people don't play with fire, but he quickly realizes that he finds Bruni too cute to stay mad at him.

Bruni accompanies Elsa, Anna, and Olaf as they continue heading the north to find the voice. As Elsa vocalizes the call to try to get the voice to respond, Olaf attempts to vocalize the same melody, but does it in a very off-key wailing, which Bruni doesn't like. Each time Olaf "vocalizes", he scares Bruni and causes him to briefly burst into flames.

Bruni is later seen watching Olaf's remains floating away from a cave. Looking upon them despondently, he realizes that Elsa has died from have ventured too deep into Ahtohallan.

Having discovered the truth and to mend the unity between the Enchanted Forest and Arendelle, Anna destroys Runeard's dam. The spirits make peace with the humans and welcome Elsa, who is revived after the falling of the dam and returns to the forest, as the fifth elemental spirit and guardian of the forest. Elsa tells Honeymaren and Yelana about her trip to Ahtohallan moments before Bruni appears and jumps into her hands. She holds and pets him as Honeymaren tells Elsa that she belongs in the forest.

Bruni is last seen in the forest, sitting on Elsa's shoulder when she receives a letter from Gale, sent by Anna, and he listens and inspects the paper as Elsa reads it. Afterwards, Elsa decides to go for a ride on the Nokk, and Bruni follows. During the ride, Elsa provides him a pile of snowflakes into which he lands and upon which he happily feasts while she and the Nokk continue towards Ahtohallan.

A light image of Bruni's flames

Bruni warms up on Elsa's hand

A light image of Bruni in Ahtohallan

Bruni rolls over on Elsa's hand 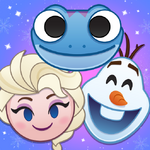 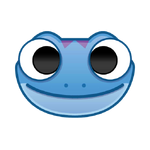 Retrieved from "https://disney.fandom.com/wiki/Bruni?oldid=4573368"
Community content is available under CC-BY-SA unless otherwise noted.