Disney Wiki
Register
Don't have an account?
Sign In
Advertisement
in: Characters, Winnie the Pooh characters, Toys,
and 12 more

Bruno, The Best Toy A Kid Could Get

Singing and dancing, showing off his many talents

Being replaced, not being the best, his key unwinding

Wind-up key
Bruno is a minor character that was featured in the television series, The New Adventures of Winnie the Pooh. His only known appearance is in the episode "Monkey See, Monkey Do Better".

Bruno is a wind-up robot gorilla toy who was in a gift in Christopher Robin's bedroom and he introduces himself as the best toy anyone can have. Rabbit accidentally upwraps it after Pooh told him that the gift doesn't belong to them. He comes off as very arrogant because of his status as "the greatest toy a kid could get". This makes him believe that he is capable of replacing Pooh, Tigger, Rabbit, and Piglet as Christopher Robin's friends. When the boy tells him that nothing could ever replace them, this sends Bruno into a phase of self-denial as he walks off by himself and allows himself to literally unwind. After the gang winds him back up, Bruno is touched by their concern and is informed that he was intended for a different kid, a friend of Christopher Robin's. He is thrilled by this news and eagerly allows himself to be packaged back up and sent to the kid in question. 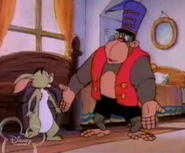