In many ways Bucky Bug is the insect world's equivalent to Mickey Mouse, as June Bug is to Minnie and Bo to Goofy. Buckey was the 17th sibling born Pop and Momma Bug, the other 16 being girls, with Buckey the only boy. Buckey's father, an irritable old grump, didn't consider himself a father until Buckey (a boy) was born, despite his 16 other children. The Silly Symphony "Buckey Bug" serial for many months and ended with the marriage of Buckey Bug to Mayor Bugg's daughter, June (this may have been the first cartoon marriage of two popular "continuing" characters) in WDC&S #28. Later the Buckey tales continued where Buckey and June are joined by other recurring characters like Buckey Junior and Buckey's nephews Tic 'n' Tac. Buckey's pal Bo was introduced to the strip as a worldly-wise tramp who teaches Bucky how to live as a grown-up (in an early period of stories, 1932, when Buckey was clearly still a kid). Interestingly, Bo had his laid-back, folksy attitude then, too, so when he stopped teaching Buckey in the 1940s stories, he easily slipped into a sidekick type of role making Buckey & Bo a duo in the tradition of "Mickey & Goofy." Buckey continues to have adventures with his best friend, Bo, and many of Disney's other insect characters who appear in the Buckey Bug stories such as Jiminy Cricket and Bootle Beetle (the later of whom Buckey and others affectionately call "Grandpa" - WDC&S #87, Dec. 1947). 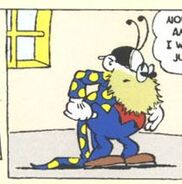 Pop Bug as he appears in the comics 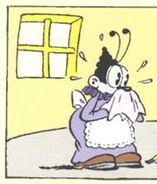 Momma Bug as she appears in the comics 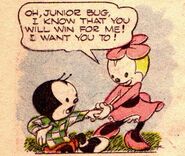 junior's lady sweet as she appears in the comics

Old King Cole as he appears in the comics 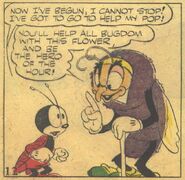 Bucky Bug as he appears in the comics

June Bug as she appears in the comics

Bo Bug as he appears in the comics
Add a photo to this gallery
Retrieved from "https://disney.fandom.com/wiki/Bucky_Bug?oldid=4053672"
Community content is available under CC-BY-SA unless otherwise noted.