Tippi Dink (wife)
Buddy "Bud" Dink is a slightly eccentric, purple-skinned, retired neighbor of the Funnies, and the first neighbor Doug meets. Mr. Dink always has a number of high-tech gadgets that were "very expensive" and speaks with a lisp. He is also claimed to be a writer in the first episode. Since he buys tons of expensive gizmos, it's safe to assume he has a lot of money. Doug frequently goes to Mr. Dink for advice, but his advice usually ends up making the situation worse. He always refers to Doug as "Douglas", and likewise says the real names when addressing the other kids as well. 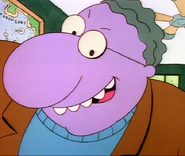