Patriarch of the Robinson family.

Science, wearing his clothes on backwards

“Welcome to the garage!”
―Bud[src]

Buford "Bud" Robinson (better known as Grandpa Bud in his old age) is the grandfather and patriarch of the Robinson family.

He is a funny person. He likes to wear his clothes backwards. His eccentricity is shown when he has a painted smiley face on the back of his head. He has problems keeping his teeth inside his head.

Bud is first seen in the future in the year 2037, having been startled by Lewis, who accidentally bumped into him. He ends up laughing and asking him if he had seen his teeth anywhere, for he's been digging holes in the yard all day and couldn't find them anywhere. He starts his conversation by joking about the smiley face drawn on the back of his head. He kept replying that he didn't know where the garage is and reveals that he didn't know it then but he had a Woodchuck living on his arm, hoping it didn't have any rabies. Lewis begs him to take him to the garage. He does so by exploring the Robinson home using the travel tubes. He introduces Lewis to all of the family members in the household with Franny being the last one. He finds her lead frog, Frankie, has his teeth and manage to get them back.

When Lewis goes back to the present, he uses Lucille as his test subject instead of himself. She tells him the date of her wedding where he finds out Bud is her husband. Both are impressed by his invention and adopt him after the science fair concludes. When they arrive at their house, Lucille and Bud take Lewis to the observatory where he spends all night writing down ideas for his future inventions. 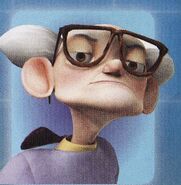 Bud in the video game

Bud Robinson and the rest of the Robinson family

Retrieved from "https://disney.fandom.com/wiki/Bud_Robinson?oldid=4556479"
Community content is available under CC-BY-SA unless otherwise noted.