Bartleby Livingston
Budderball is a golden retriever puppy who appears, along with his siblings, in the Air Buddies film series.

Budderball is the chubbiest and presumably the oldest of the Buddies. He enjoys eating and wears black ink on his face to look like a football player. In addition, he also sports a red football shirt. When his paw is pulled, he passes unbearable gas. Because he is best known for being a glutton, this sometimes causes his younger siblings and himself to wind up in trouble. He also got on Santa Paws' naughty list for eating the family's Thanksgiving turkey, but was eventually taken off. He lives in Fernfield, Washington, with his famous all-star father, Buddy, and mother, Molly. His owner is Bartleby Livingston, a rich but lonely boy who was seemingly a bully at first, though all he truly wanted was a friend, which is why Budderball decided to stay with him. 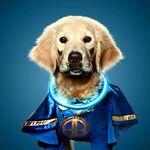 Budderball using his flatulence to deflect the Halloween Hound's howl breath back at him.