Disney's Adventures of the Gummi Bears

To succeed the big Bear consecration, having fun with Cavin, whistling his flute

Gobbas, being clumsy on his own

Unknown
Buddy is a young Gummi Bear, around Sunni's age. He is a member of the Barbic tribe of Gummi bears and is Ursa's protege.

Despite being a Barbic, Buddy's personality is the most laid back and gentle of the tribe, as he prefers practicing his flute and generally having fun with developing his skills as a warrior. This puts him at constant odds with Ursa, who is adamant that he put away what she believes to be "childish" pastimes and develop in the true Barbic tradition.

He first appears in episode 47 ("Return to Ursalia") when the Gummi Glen Gummies take a trip to Ursalia and meet the Barbics who now live there. Buddy quickly develops a friendship with Sunni and the two play a small, but vital role in the episode, as they narrowly escape capture by Duke Igthorn, and discover the Ultimate Gummi Weapon hidden in the heart of Ursalia.

Episode 67 ("The Rite Stuff") is all about him, and his Test of Bear-hood, as he prepares to come of age as a Barbic. Buddy is initially depressed over the added pressure from Ursa of competing against Cavin, which worsens after he loses the first challenge of the test to the young human. After Cavin saves his life in Gordian Gulch, Buddy angrily quits the test, believing that he will never live up to Ursa's standards and become a true Barbic.

However, Buddy saves Cavin from a monster moments later and the two become friends as Cavin quits the test himself for the same reason as Buddy. Buddy ultimately gains his bear-hood, and Ursa's respect, along with Cavin, as they work together to rescue Ursa, Gruffi and Sir Thornberry from a pair of satyr-like Gobbers. 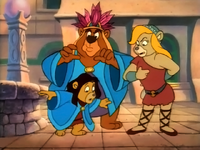 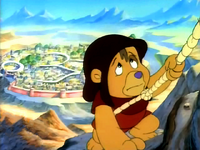 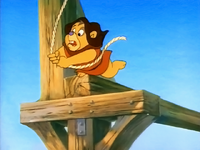 Retrieved from "https://disney.fandom.com/wiki/Buddy_(Gummi_Bears)?oldid=4548930"
Community content is available under CC-BY-SA unless otherwise noted.