Sandy, Ivy, and Lisa
Leonard Hacker, better known by his stage name Buddy Hackett, was an American actor, voice actor, and comedian. He was well known for his roles as Marcellus Washburn in The Music Man (1962) and Benjy Benjamin in It's a Mad, Mad, Mad, Mad World.

On June 30, 2003, Hackett died in his Malibu home from complications of diabetes at the age of 78. 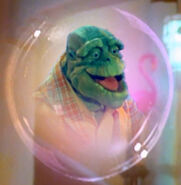 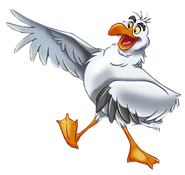 Buddy Hackett behind the scenes of The Little Mermaid.

Buddy Hackett with (L-R) Pat Carroll, Tara Strong, Jodi Benson, and Samuel E. Wright at premiere of The Little Mermaid 2: Return to the Sea in September 2000.