At the de la Vega hacienda in Los Angeles

Being able to marry Romaldo

Not being able to marry Romaldo, Lazaro

"In our hearts we would always know we've done something wrong."
Buena is a young servant girl in the 1957 TV series, Zorro.

Two indentured servants who wish to marry find that the law states they must have the permission of their masters. Buena (Gloria Castillo), who works in the de la Vega hacienda, is told she is free to marry, but her boyfriend, Romaldo (Tom Pittmann), is not so fortunate. One of his co-workers also wants to marry Buena so he convinces their boss that Romaldo plans to run away after the ceremony.

In fact, Romaldo does run away, but he does so to find Buena so they can elope. Diego de la Vega (Guy Williams) helps her convince Romaldo that it would be best to explain to Don Tomas Yorba (John Hoyt), the other landowner, how he feels, and perhaps change his mind. Don Tomas refuses to listen and orders Romaldo confined to the ranch as punishment.

Lazaro (Arthur Batanides), the scheming co-worker, beats Romaldo and the youth runs away once more. Buena is tricked by Lazaro into coming to the Yorba ranch, where he tells her he is in love with her. Her rejection angers him and he pulls out a knife, forcing a watching Zorro to intervene. Diego had learned that Buena had snuck out and followed her, a lucky decision that saves her life.

Zorro and Buena convince Don Tomas that Romaldo is an honorable man and they receive consent to wed. The two servants will continue to serve out their contracts, but now can do so as man and wife. 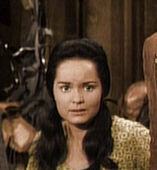 Add a photo to this gallery
Retrieved from "https://disney.fandom.com/wiki/Buena?oldid=2796287"
Community content is available under CC-BY-SA unless otherwise noted.