To see Kristoff and Anna together

When two people can't recognize their love for each other

"What's the issue, dear? Why are you holding back from such a man?"

“Cuties - I'm gonna keep you!”
―Bulda, to Kristoff and Sven

Bulda is a minor character in the 2013 Disney animated feature film, Frozen. She is a female troll and the adoptive mother of Kristoff.

Bulda is shown towards the beginning of the film, when King Agnarr and Queen Iduna are rushing to save Anna, after she is struck by Elsa's ice powers. A young Kristoff and Sven arrive at the scene, where Bulda adopts them.

Bulda appears later in the film, during the second meeting with the trolls and the "Fixer Upper" song sequence. Bulda takes Anna for Kristoff's girlfriend, along with the other female trolls, assist in dressing Anna in her troll wedding outfit.

Bulda plays a much smaller role, first appearing after the Arendellians were forced out of their home by the spirits. She excitedly leaps onto Kristoff, exclaiming that she’s missed him. During the climax, she, Cliff, and Grand Pabbie are seen watching alongside the Arendellians as Elsa saves the kingdom from being destroyed by a massive wave. 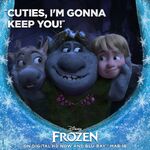 Retrieved from "https://disney.fandom.com/wiki/Bulda?oldid=3904642"
Community content is available under CC-BY-SA unless otherwise noted.