Bulldog has been racing longer than every other racer on the circuit. As the oldest and arguably wisest, he remembers a time before GPS, when real racers trusted their gyros and navigated by the stars. When it comes to racing, it boils down to two qualities, says Bulldog: good flying and sportsmanship. Period. While the competition secretly wonders if the aging plane is past his prime, he flies his way onto the leader board again and again, proving that this Bulldog has lost none of his bite.

Bulldog is very patriotic, stating that he doesn't cry because he is British and is very confident in winning. Though at first he wasn't very close to Dusty, he believed Dusty could win after saving his life. Bulldog, along with the rest of Dusty's friends, gives parts to Dusty after he got damaged during a storm, demonstrating that he is grateful of Dusty saving his life.

Bulldog with two of his pitties 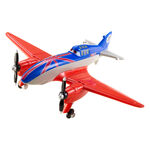 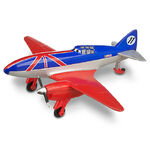