His strength
His flight
Bumblelion is the secondary protagonist from Disney's 1985 television series the Wuzzles. He was voiced by Brian Cummings.

Half bumblebee and half-lion, Bumblelion is mostly lion in appearance. He is a short, squat orange furred creature with a pink mane, fuzzy antennae, a lion's tail, small insect wings, and horizontal brown stripes up his tummy.

He lives in a beehive, likes sports, is courageous, and has a crush on Butterbear. He is said to be the sort who "... rush in where angels fear to tread". He and Eleroo are best friends. 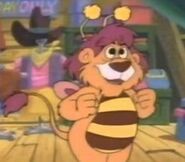 Retrieved from "https://disney.fandom.com/wiki/Bumblelion?oldid=4167529"
Community content is available under CC-BY-SA unless otherwise noted.