Getting caught, being rejected, losing their parents, eating their vegetables

There is a total of 420 bunny children. They first appeared in Oswald's first cartoon Poor Papa. Though the cartoon wasn't successful, they would go on to star in Oswald's later cartoon Trolley Troubles. Later, they made a cameo appearance in Oh Teacher.

The Bunny Children are recurring characters in the Nintendo Wii game, Epic Mickey. Here, they along with Oswald were eventually forgotten and wound up in Wasteland. After Oswald was defeated by the Shadow Blot in the Blot Wars, they roamed throughout the land having nowhere else to go. Things got worse for them as Oswald and Ortensia fought the Blot again on Mickeyjunk Mountain. The two managed to trap the Blot in the Thinner Jug, but at the cost of the bunny children's mother Ortensia, who sacrificed herself protecting Oswald from the Blot and was turned into an inert statue. Meanwhile, their father Oswald devoted himself to guard the Jug, making sure the Blot never escaped, leaving the Bunny Children alone to roam around.

They have a massive appetite for Blotlings. To their father's distaste, they are quite fond of Mickey Mouse (sometimes a little too fond). They mourn the loss of their mother, as some are found in Ortensia's house missing her.

Warren Spector confirmed that the Bunny Children would appear in Epic Mickey's sequel. When asked, Spector replied, "Of course! You don't think we'd create characters that cute and appealing and monstrous and not bring them back, do you?"

They are first mentioned by Ortensia in the museum while the projectors aren't working. She tells Oswald and Mickey that she worries about her Bunny Children in Ostown. Ortensia will eventually travel to Ostown and find the Bunny Children missing as the quakes have scattered them all over Wasteland. Talking with her gives Oswald and Mickey a quest to return the Bunny Children to her. Meanwhile, Paulie of the ice cream parlor wants them too, so he can sell them ice cream. This results in a choice between Ortensia and Paulie for the player.

Mickey and Oswald must lure them to pipes that will suck them either to Ortensia's house or Paulie's ice cream parlor. Interestingly, when all of them are brought to Ortensia, she gives Mickey a pin commemorating the 101st child, stating, "SHE'S such a scamp!" This means that, despite them all being called Oswald Junior, at least one of the bunny kids is a girl.

One of the kids also makes a cameo in a cutscene with the Mad Doctor.

The bunny children are also characters in the Epic Mickey: Tales of Wasteland (digi)comics. These comics are a prequel to Epic Mickey and take place before the Thinner Disaster. The Bunny Children make a cameo in "Clock Tower Cleaners", and "Oswald the lucky Duck", but have bigger roles in "The Game's Afoot", "One Scary Night" and "There a hole in the Sky". They play a larger role in the comics than in Epic Mickey.

They are quite the troublemakers, but most will gladly help Oswald and Ortensia when asked. They are all called "Oswald Junior" plus their number. The Bunny Children can also talk in the comics, unlike in Epic Mickey where Mickey can't talk to them at all.

Unlike most other characters in the "Tales of Wasteland" comics. They don't have their own character profile. However, they are mentioned in Oswald and Ortensia's character profile. Oswald's profile mentioning that the children want to play with Oswald, but usually can't because Oswald can't put Mickey Mouse and the outside world into his rearview mirror. While Ortensia's profile has Ortensia wishing that Oswald would spend more time with her and their children. This seems to both confirm Ortensia as their mother (at least in Epic Mickey and the comics) as well as Oswald not spending enough time with the Bunny Children. The former being confirmed in Epic Mickey 2: The Power of Two.

One of the rare instances where the Bunny Children speak

The Bunny Children are very fond of their uncle Mickey. 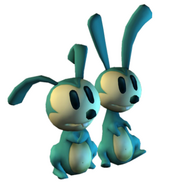 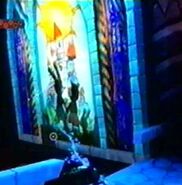 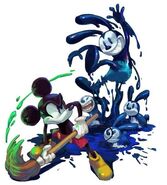 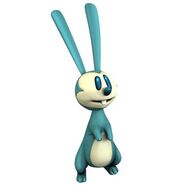 A Bunny Child with the Mad Doctor in Epic Mickey 2

Ortensia talks about the Bunny Children. Confirms her as a mother