Flight
Burbank is a gargoyle clone and a member of the Labyrinth Clan in Disney's Gargoyles. He is the clone of the gargoyle Hudson.

Burbank looks much like Hudson, but the artificial aging has changed his coloration. He has yellow skin, blackish wings, black hair, red eyes, black teeth, and a white mouth.

Burbank is the only one of the younger clones to wear full armor and pants, and the only clone to use a weapon (a mace). Why exactly he dresses this way is unknown, but possibly because Thailog wanted him to look as much like Hudson as possible, perhaps to make him more disconcerting. This could also be why Burbank sports a beard, though he is just as young as the other Clones.

Unlike the other Clones, Burbank is not artificially aged to a point matching his genetic template, but is instead slightly younger, essentially being in his prime. Burbank's eyes glow red, not white, as most male gargoyles' eyes do as a consequence of being a clone.

Dr. Anton Sevarius created Burbank when Thailog and Demona commissioned him to create a clan of clones. Burbank, like the other clones, was aged to his prime, rendering him stronger than Hudson, his genetic template, but also leaving him significantly discolored. Thailog pitted Burbank and the other clones against the Manhattan Clan, but was ultimately defeated. When Thailog appeared to have died in a fire on Coney Island, Talon volunteered to take Burbank and the other clones to the Labyrinth to teach them to think for themselves, and "to use verbs."

When Thailog stormed the Labyrinth, Burbank quickly succumbed to his will. He and his clan-mates held Claw at bay, then stormed Castle Wyvern to reclaim Delilah. Burbank battled the Manhattan clan, until Delilah ended the conflict, proposing that each cloned gargoyle decide whether to reaffirm their allegiance to the Labyrinth Clan, or to return to the services of Thailog. Burbank decided the Labyrinth was good and returned there. 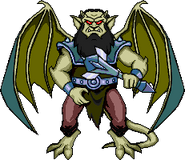 Retrieved from "https://disney.fandom.com/wiki/Burbank?oldid=4008099"
Community content is available under CC-BY-SA unless otherwise noted.