To get Old Yeller back (formally)

Trades Old Yeller for a horned toad and home-cooked meal
Burn Sanderson is Old Yeller's original owner in the film of the same name.

Burn arrives at the Coates ranch revealing that Old Yeller is his dog. Although Travis is devastated, Katie knows she must let Burn take him. As he leaves, however, Arliss explodes in anger, throwing a rock that makes Burn's horse rear and throw him off. He is angry at first but then takes Arliss on his knee and agrees to trade Old Yeller for a horned toad and home-cooked meal, which Katie supplies with pleasure. Upon leaving, he informs Travis that a plague of hydrophobia, or rabies, is affecting local animals, with telltale signs that include staggering, viciousness, and unprovoked attacks. 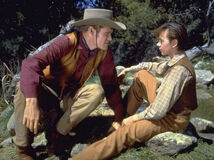 Retrieved from "https://disney.fandom.com/wiki/Burn_Sanderson?oldid=4091086"
Community content is available under CC-BY-SA unless otherwise noted.