Mr. Slicker
Butch is a friend of Mickey Mouse, introduced in the Mickey Mouse comic strip storyline "Mr. Slicker and the Egg Robbers".

When Mickey Mouse met Butch he was Mr. Slicker's second-in-command in his gang of thieves. Mickey convinced Butch to reform and he helped bring Mr. Slicker to justice. Butch and Mickey have remained friends ever since and often work together. Butch has not had a strong education but is very streetwise. Butch lives in a cabin in the woods outside of Mickey's home town. 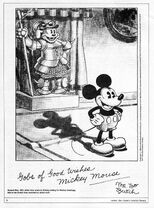 Butch appeared alongside Mickey in this autographed "photo", sent to fans who wrote in during the "High Society" storyline.
Add a photo to this gallery

Retrieved from "https://disney.fandom.com/wiki/Butch_(Mickey%27s_friend)?oldid=4049878"
Community content is available under CC-BY-SA unless otherwise noted.