Bonnie getting in trouble

“We do a lot of improv here. Just stay loose, have fun - you'll be fine!”
―Buttercup to Woody[src]

Buttercup is a supporting character from the Disney•Pixar Toy Story franchise, first appearing in Toy Story 3. He is a white toy unicorn with a sarcastic and conversational personality belonging to Bonnie Anderson.

Despite his feminine appearance, Buttercup is very gruff and sarcastic, which causes him to become best friends with the equally sarcastic Hamm. He is very helpful and relaxed when it comes to Woody asking for help. Despite this, he is shown to be a little oblivious, such as when he thought the name on Woody's boot spelled "Ydna" when it was actually Andy upside down, or when he believed Hamm had an uncle who was a pilot. He's also shown to have a mischievous side to him, as evidenced in Toy Story 4 where he repeatedly suggests that the toys can try to frame Bonnie's father for a crime and have him sent to jail as a solution to their problems.

Buttercup is a white plush unicorn with a yellow mane and gold horn. He has blue eyes with eyelashes. He also has pink heart-shaped nostrils.

Buttercup first appears in Bonnie's room when he meets Woody. He and Trixie (who assume Woody is just a new toy rather than coming from Sunnyside Daycare) welcome the cowboy nicely while Mr. Pricklepants shushes all of them while trying to stay in character. When Woody asks about an exit, Buttercup says there is no way out, only to reveal he was joking. The unicorn reassures the apprehensive Woody that Bonnie's playtimes are amazing, and the cowboy eventually enjoys getting played with for the first time in years. That night, Buttercup is sleeping with the others with Bonnie. Woody sneaks out of the bed and reads the address on Bonnie's backpack. Bonnie's toys wake up and are confused as to why Woody would want to leave. Woody reveals he belongs to Andy and needs to get home.

The gang uses the family computer in the kitchen to look up a map. They are ecstatic to find out Andy's house is right around the corner of Bonnie's. As Woody is about to leave through a cat door, he tells Bonnie's toys if they ever make it to Sunnyside Daycare, tell Andy's toys he made it back home. The toys are shocked to realize he came from Sunnyside, much to Woody's confusion. Mr. Pricklepants and Buttercup explain that Sunnyside turns into a prison when it closes, and a teddy bear named Lotso rules over with an iron fist. After listening to Chuckles, another toy Bonnie found who experienced the trauma of Sunnyside, Woody decides to go back to save his friends, despite Bonnie's toys' warnings.

Buttercup is not seen until the end, where Bonnie plays "Haunted Bakery" outside her yard with her toys. Andy arrives and donates his toys to her. The two then play with each others' toys and Andy's toys experienced getting played with one last time by Andy. The toys then watch in happiness as Andy leaves for college, now gaining a new owner. Buttercup is then seen sniffing and smiling at Bullseye.

During the end credits, he is shown becoming close friends with Hamm, as the two are seen standing side-by-side when Woody reads his friends a message from Sunnyside written by Ken, joking with one another as an Alien and Mr. Pricklepants perform their rendition of Shakespeare's Romeo and Juliet, and watching Buzz and Jessie perform a pasodoble.

Buttercup returns in the fourth installment. He is one of the toys Bonnie chooses for her town game. Later after Bonnie’s first day of school, he asks Woody if he’s trying to get Bonnie in trouble. He shows clear excitement about a vacation. Later, he meets Forky and asks why he wants to go to the trash. Buttercup tags along with the other toys on the Andersons' road trip. After Forky jumps out the window one night and Woody goes after them, the rest of the gang keep an eye on Bonnie. Buzz leaves to find the two toys while the rest figure out a way to keep the family from leaving the carnival. Buttercup has a running gag where he suggests they frame Mr. Anderson for something illegal and send him to jail, much to the group's confusion.

After Forky and Buzz return, the gang tries to figure out a way to get the R.V. back at the carnival to rescue Woody. Jessie has an idea to have Trixie and Mrs. Potato Head pretend to be the GPS. Meanwhile, Buttercup hides under the gas pedal and pulls it to make the R.V. go faster. This leads to the family being chased by the police. When the R.V. finally arrives at the carnival, the gang stops their shenanigans and the police ask Bonnie's father to step out of the vehicle, to which Buttercup whispers, "Dad's TOTALLY going to jail!"

After Forky locks the family out of the R.V., the rest stack themselves up to open the awning and climb up to the roof, where they all say a proper goodbye to Woody and Bo Peep. A year later, Jessie introduces the gang to Karen Beverly, Bonnie's newest creation.

In "Hawaiian Vacation", Buttercup can be notably seen playing poker with a few of the other toys, which he asks Mr. Potato Head if he wins, but he and Mrs. Potato Head say they are gonna have a fun week together, but Mr. Potato Head takes off one of his eyes and arms to play poker with them. Buttercup is also seen when Barbie and Ken go horseback riding. Ken jumps on Buttercup and tells him to go, but Buttercup replies by saying, "Okay, get off me." At the end, when Barbie and Ken went outside for their first kiss, Buttercup says the temperature in the snow has got to be a bazillion degrees below. So far, this is the only Toy Story Toons episode to have Buttercup speaking.

In "Small Fry", Buttercup makes a brief silent cameo in this short.

In "Partysaurus Rex", Buttercup also makes a brief silent cameo in this short. 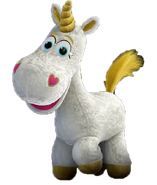 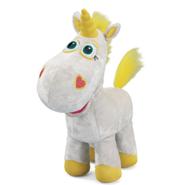 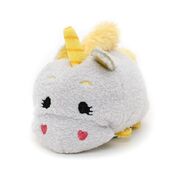 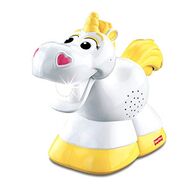