Have a successful first day as a Cranium Commander, guide Bobby through his day

“Now remember, gang. If you get stressed out, just call on your general knowledge! Balance your body crew, and get your cranium under command. Use your head, don't lose your head. It's easy! You'll be flying in no time as a member of the Cranium Command!”
―Buzzy

Buzzy is the protagonist of the former Epcot attraction Cranium Command from the Wonders of Life pavilion.

Cranium Command began development as "The Head Trip" and was to feature three pilots representing Emotion, Intellect, and the Nervous System, with a loose space travel theme to the interior of the head. "The Head Trip" changed to a military theme and took on the names "Brain Command" and eventually "Cranium Command". The three pilots were merged into a single character named Captain Cortex, who was characterized as being overly-confident and cocky, but was not well-liked by audiences. Captain Cortex was renamed to "Sparky", and then "Buzzy", and with that came a new design and more endearing personality.

This change came late enough that several Wonders of Life-inspired educational films still used the Captain Cortex version of the character, and a mural inside the building features his old design. The animatronic was originally modeled to be Captain Cortex and thus had to be retrofitted to resemble Buzzy once the character was redesigned. Because of this, the animatronic Buzzy and cartoon Buzzy have very different appearances.

David Pruiksma noted inspirations for Buzzy's design as Tweedle Dee and Tweedle Dum from Alice in Wonderland, the Lost Boys from Peter Pan, J. Audubon Woodlore from several Humphrey the Bear shorts, as well as Walter "Radar" O'Reilly from M.A.S.H.

In Cranium Command, Buzzy is portrayed as being endearingly clumsy and pitiful, but remaining in good spirits throughout his hectic first day of work. His commanding officer General Knowledge chides him for looking as though his mother still dresses him (which he admits to), refuses to learn his proper name, continuously insults his intelligence, and gives him an near-impossible assignment--despite all this, Buzzy is consistently cheerful and welcomes all adversity with enthusiasm.

According to Buzzy's animator and designer, David Pruiksma, Buzzy "was supposed to be your average, every day Joe. The kind of person that is woefully inadequate at the tasks before them but never gives up trying. A down-trodden, overlooked type who gets short shrift at first but later proves themselves worthy."

Buzzy is a young and diminutive recruit for Cranium Command, a military-like organization which finds individuals (shown as cartoons) to pilot brains (shown as live-action actors). The clumsy Buzzy shows up late for his first day on the job, and is berated in front of the other recruits by his commanding officer, General Knowledge. Despite this, Buzzy begs General Knowledge to give him a chance in the command seat. He is assigned to "the most unstable craft in the fleet", an adolescent boy. Buzzy readily accepts this challenge helps Bobby through a difficult day of dealing with bullies, crushing on girls and living through food fights, ultimately proving himself to be a capable pilot by remaining calm and learning how to have the different parts of one's body work together to reduce stress.

A sprite of Buzzy (in his original red costume) appears on the map of Epcot representing the Wonders of Life pavilion.

Theft of clothing and animatronic

In the late 2010s, the Wonders of Life pavilion became a popular spot for Urban Explorers, as a great deal of it remained intact behind the scenes of what was, at the time, a festival center. Cranium Command appeared to be untouched, with the Buzzy animatronic's hydraulic lines still active and him remaining in position for show start despite having been inactive for over ten years.

In 2012, an unknown person entered the Cranium Command theater and stole Buzzy's brown fabric gloves. Early into the attraction's life, Buzzy's molded rubber hands began to wear out and were replaced with brown fabric gloves. From 2012 on, photos of Buzzy show him with bare metal animatronic hands.

Photos were taken of Buzzy inside the Cranium Command theater in 2013, interestingly with scaffolding around him. After this event, some minor cosmetic issues with the animatronic (drooping eyelid, mussed hair) were fixed.

In early 2018, an urban explorer trespassing inside Cranium Command found that Buzzy and Hypothalamus had been tagged to be sent to the archives.

Later that year, a person again trespassed inside Cranium Command and stole Buzzy's headphones, hat and bomber jacket off the animatronic. A police report was filed by Disney for these items, however, the individual who filed the report was unfamiliar with the appearance changes the animatronic had gone through over the years and erroneously reported Buzzy's rubber hands, which had not been in use since 1990, as missing. The report also described a "red jacket", actually Buzzy's brown jacket which appears red due to lighting in the main photo of the animatronic that is commonly seen. After this event, the animatronic remained in place missing his hat and jacket.

Shortly after the theft of the clothing items, the entire Buzzy animatronic, including his command seat, were stolen from the Cranium Command theater. Buzzy was cut from an already-frayed point on his wiring connecting him to the back of the theater. Hydraulic fluid was found splattered around the area. Because there were no cameras in the backstage of the Wonders of Life pavilion, no video footage was able to be procured. The individuals behind the theft, their method of removal, motive, and current whereabouts of Buzzy are unknown.

A former Cast Member, who ran the Twitter account "BackDoorDisney", was questioned by police following the animatronic theft as he had been a person of interest during the theft of the clothing. After his questioning, BackDoorDisney posted a photo of a rubber mold used to create the animatronic's face on display in a collector's gallery. News sites began to pick up on the story and sensationalized it to a great degree, reporting the aforementioned photo as "Buzzy's decapitated head".

In October 2019, Buzzy's jacket, headphones and hat were recovered after being sold to Milwaukee Bucks player Robin Lopez, who did not realize the items were stolen when he bought them. Lopez reported that he was sold the clothing by BackDoorDisney, who was arrested earlier in the year for stealing other items from Disney attractions.

Buzzy as he appears in the preshow

Buzzy as he appeared on the marquee inside Wonders of Life

Wonders of Life poster in the Epcot Experience

Ruff model sheet of Buzzy via David Pruiksma on Facebook

Captain Cortex maquette for the animatronic

Captain Cortex maquette for the animatronic

Buzzy in the show storyboard

"Sparky" with the Captain Cortex design appearing in the preshow storyboard

Captain Cortex in the Wonders of Life educational film shorts 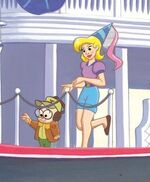 Captain Cortex appearing in Walt Disney World Explorer
Add a photo to this gallery
Retrieved from "https://disney.fandom.com/wiki/Buzzy?oldid=4115525"
Community content is available under CC-BY-SA unless otherwise noted.