Still standing
BuzzzTube is a popular fictional media site on the Internet. Headed by the trendy algorithm Yesss, it takes the appearance of a business headquarters.

BuzzzTube is a video-sharing site and the most popular of its kind. It is a hotspot for net users, who frequently visits the website in droves to watch trending videos and leave physical hearts for their favorites; these hearts can be turned into money, making BuzzzTube a great way to get rich quick.

Another area featured in this site is the comments section where visitors pass through a library of comments being shown on giant smartphones. According to Yesss, anyone who visits BuzzzTube should not go to this area to read the comments because some comments anyone who is reading could make them miserable.

After Shank tells Ralph and Vanellope that there are more ways to earn money other than taking other racers' cars, she directs the two that the videos sent to BuzzzTube help the two earn more money to buy the steering wheel for Sugar Rush. In it, various videos are shown in various consoles in this area, including a video of Ralph in Slaughter Race going viral where the two see various users giving hearts for Ralph to earn money. Ralph and Vanellope enter Yesss' office where she serves as the curator at BuzzzTube where she asks Maybe to bring the two out of her office but her assistant says that Ralph's video earned multiple hearts, thanks to Shank who brought in the video. When Vanellope asks her if hearts given by users make actual money, Yesss says that hearts given to BuzzzTube users are converted into money. Ralph than asks Yesss to know if he could make multiple videos of himself doing unusual things, in which Yesss explains that doing these videos help Ralph earn hearts fast. Ralph decides to copy most of the videos shown on BuzzzTube to earn hearts fast.

Meanwhile, an office employee named Lee sees an edited video with Ralph's head on a goat on BuzzzTube. The videos Ralph made on BuzzzTube end up becoming positively enjoyed by several viewers, including animated versions of the band Imagine Dragons who enjoyed the videos. Back at the BuzzzTube area, Yesss gives an announcement to various BuzzzTube pop-ups to see Ralph's videos to help Ralph and Vanellope earn more hearts before Sugar Rush gets taken away from Litwak's Arcade. Ralph offers to become a BuzzzTube pop-up just like the ways sending users to BuzzzTube, but Yesss tells him to stay in this area to help earn more hearts. Vanellope then decides to leave BuzzzTube to go to another site called "Oh My Disney" while Ralph continues to earn more hearts to accumulate enough money for the steering wheel for Sugar Rush. Meanwhile at Oh My Disney, Vanellope asks some viewers to see Ralph's videos at BuzzzTube and accidentally runs into a fleet of netizen Stormtroopers where they ask her that using a pop-up from another site in Oh My Disney is considered unauthorized clickbait to the Stormtroopers and one of them is sent to BuzzzTube with the Stormtroopers planning to stop Vanellope from doing so in which Vanellope manages to escape into the Disney Princesses' room.

Back at BuzzzTube, the Eboy arrives at Yesss' office, telling Ralph that the eBay bid he received expires in 30 minutes in which the bee pun Video Ralph did is not being shown on BuzzzTube, due to a loading error, explaining to him that a video not shown across the BuzzzTube consoles does not earn him hearts and Ralph plans an alternative way to earn more hearts by going downstairs. Seeing only one viewer seeing the edited goat video, Ralph asks more viewers to see his video and noticing other viewers seeing one of the cat videos, Ralph shifts the monitors to help make his video more popular than the other BuzzzTube videos as Ralph arrives in another area in BuzzzTube where he sees countless comments on giant phones. Yesss then arrives feeling worried that Ralph should not read the comments on the giant phones because entering the comments area could make viewers feeling miserable about them since the comments on the giant phones are not only about Ralph, but about other video users. Yesss then later explains that Ralph has earned enough hearts to buy the steering wheel as he has reached the target of how much money is needed to buy the steering wheel. Ralph then asks the Eboy to bring him to eBay to buy the steering wheel since he has earned enough money as he gives Ralph a ride to eBay. 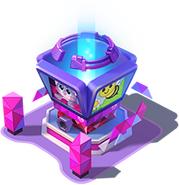