1995-present
Byron P. Howard is a Japanese-born American supervising animator and film director. Howard grew up in Issaquah, Washington, attending Issaquah High School (graduating in 1986) and attending The Evergreen State College in Olympia, WA. Howard's career in animation began 15+ years ago when he followed his childhood dream to work for Walt Disney Animation Studios by writing for advice from one of Disney's Nine Old Men animators, Frank Thomas. Using Mr. Thomas's helpful letter, he structured his entire curriculum. Before the ink was dry on his diploma, he relocated to Orlando, Florida, where he worked as a tour guide for Disney's animation tour at Disney MGM Studios. After 4 portfolio submissions, he began the Disney animation internship and was hired in 1994. He went from inbetweener to animator to supervising animator in just 5 years. Since relocating to the California studios in 2004, he has worked as a story artist, character designer on Cobra Bubbles for Lilo & Stitch and Kenai for Brother Bear, and director on Disney's 48th animated feature film Bolt. Byron Howard was recognized for an Annie Award Nomination in 2004 for Outstanding Character Animation on Brother Bear.

He started his career in 2008 with the film called, Bolt, as a director, other director of this film is Chris Williams, and writers of the film are Dan Fogelman and Chris Sanders, released on November 21, 2008, and the cast of the film includes: John Travolta, Miley Cyrus, Susie Essman, Mark Walton, Malcolm McDowell, James Lipton, etc. He also directed the short film tied in with Bolt's DVD/Blu-Ray release called, Super Rhino. He also directed Tangled with Nathan Greno.

In May 2013, it was reported that Howard, along with Rich Moore, was directing an animated animal comedy film for Walt Disney Animation Studios. A few months later, it was revealed that the film would be titled Zootopia, and was released on March 2016.

In the Fusion documentary Imagining Zootopia, Howard declared he is gay and has been married since 1988. 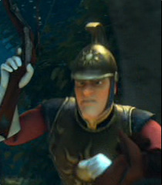 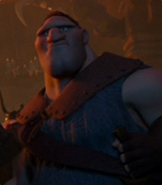 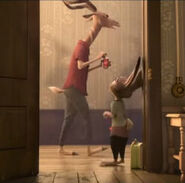 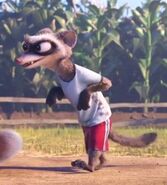 Travis
(Zootopia)[1]
Add a photo to this gallery

Winnie the Pooh by Byron Howard

Byron Howard and Chris Williams at the premiere of Bolt in November 2008.

Byron Howard and Nathan Greno at the premiere of Tangled in November 2010.

Byron Howard and Rich Moore behind the scenes of Zootopia.

Byron Howard with Rich Moore and Clark Spencer pose in the press room during the 89th annual Academy Awards in February 2017.
Add a photo to this gallery

Retrieved from "https://disney.fandom.com/wiki/Byron_Howard?oldid=3903454"
Community content is available under CC-BY-SA unless otherwise noted.