Not to be confused with Candace Flynn or Candice.

A peach penguin with purple hair and pink highlights, green headphones, a pink and yellow scarf and armbands, black and white sneakers, and a t-shirt with a purple belt

To DJ the Night Club

"Catch y'all on the flip SIDE!"

“Your moves are ICE COLD!”
―Cadence

Cadence, also known as DJ K-Dance or DJ Cadence, is a local Club Penguin DJ, singer and a great dancer. She is a peach-colored penguin who has purple hair with pink tufts, green headphones, a pink and yellow scarf, a pair of pink and yellow wristbands, black eyelashes, along with black and white shoes.

She seems to be very polite. She is a more modern penguin proved by her saying "lol" and "EPIC FAIL!". She did not have any body items until her redesign in 2013, however. She first appeared in the Club Penguin Times when there was a tour about the Night Club. Her favorite phrase is, "It's time to dance!". She likes to call herself the "Dance Machine". Like Rockhopper, the Penguin Band, Gary, Rookie, and Aunt Arctic, she waddles around Club Penguin Island giving out a free background. Cadence is part of the team that made the Dance-A-Thon party. She made a brand new game called Dance Contest. She is the only penguin that can equip two hand items: her boom box and her wristbands. Cadence is one of the only famous female penguins on Club Penguin other than Aunt Arctic. She seems to like sugar, since she continuously screams "CHOCOLATE!" or "ICE CREAM" OR "SUGAR RUSH!" She loves to dance with penguins.

Penguins using a cheating device such as WPE Pro can get her hair, wristbands, scarf and shoes, but this is cheating, which is against the rules and will most likely result in a ban.

She shows up in the Dance Contest game. When she asks what difficulty the player wants, they can click on her to get to Expert Mode, which is really hard. The player would have to be pretty good at Dance Contest to do well on the expert level.

Cadence has a Purple Puffle named Lolz[1] first seen at the Puffle Party 2011.

Club Penguin released a Plush Toy for Cadence, which was in series 5, She is the fifth famous penguin that has a matching plush.

One of Cadence backgrounds

Cadence as seen in The Party Starts Now

Cadence with Rocky and CeCe 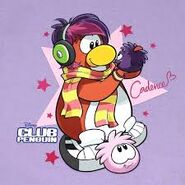