Incredicoaster
California Screamin' was a steel roller coaster located at Disney California Adventure in Anaheim, California. Opened on February 8, 2001, it was one of the park's original rides, and was the only roller coaster at the Disneyland Resort to feature an inversion. Its top speed of 55 miles per hour (89 km/h) made it the fastest ride at the Disneyland Resort and one of the fastest rides at any Disney theme park. It closed on January 8, 2018 to be rethemed as Incredicoaster, based on The Incredibles as part of the new Pixar Pier.[1]

The coaster was designed by Ingenieur Büro Stengel GmbH and was built by Intamin. It was the eighth-longest roller coaster in the world (and third-longest steel coaster in the United States), at 6,072 feet (1,851 m) long. It was also the longest ride with an inversion. Its highest point was 120 feet (37 m) followed by a 108-foot (33 m) drop. Though built of steel, the structure as designed visually mimicked the features of a wooden coaster.

The coaster had some distinctive features. It used linear induction motors to launch the train up the first hill, replacing the traditional lift hill chain. It was one of Disney's fastest attractions, accelerating guests from zero to 55 miles per hour (89 km/h) in four seconds at the launch. Like Space Mountain and Rock 'n' Roller Coaster, it was set to music. It was the only inverting attraction at the Disneyland Resort. This attraction offered both Fastpass and Single Rider entrances.

After the refurbishment of Disney California Adventure, from 2007 to 2012 the Mickey Mouse head located behind the vertical loop was changed to a sunburst icon with the Paradise Pier logo.

On July 15, 2017, Disney announced a complete renovation of Paradise Pier, renaming it Pixar Pier. Meanwhile, rumors began to circulate that California Screamin' would be rethemed to Pixar Animation Studios' The Incredibles. On November 2, it was confirmed that the ride would be remodeled. California Screamin' closed on January 8, 2018 for the transformation into Incredicoaster. The remodel would include a new queue line, engineering reboots of the existing launch system, new storyline, enclosed scream tunnels and a new soundtrack. The new trains were unveiled in April. Incredicoaster opened on June 23, 2018 to coincide with the release of Incredibles 2.

On January 3, 2007, the coaster's standard onboard audio track was temporarily replaced with a remixed version of the Red Hot Chili Peppers' "Around the World," and it was renamed Rockin' California Screamin'. This was promoted alongside Rockin' Space Mountain, a similar change made to Space Mountain in Disneyland, though that ride's audio was changed to the Red Hot Chili Peppers' cover version of "Higher Ground". These changes were part of the "Rockin' Both Parks" campaign. The standard audio track was restored when the campaign ended.[3][4] 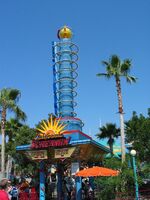 The entrance to the ride 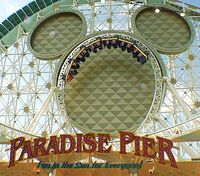 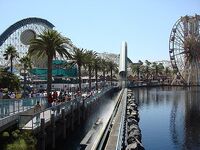 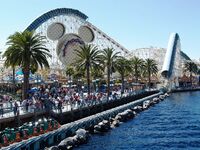 California Screamin' at night with the former Sun Wheel 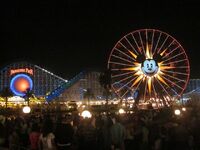 California Screamin' at night with the former Mickey's Fun Wheel